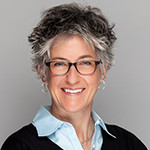 Deb Kilpatrick is the co-CEO and Executive Chair of Evidation, whose platform powers new understanding of health, disease, and product impact in everyday life. She began her medtech career at Guidant Corporation in multiple leadership roles that included Research Fellow, Director of R&D, and Director of New Ventures in its Vascular Intervention Division prior to its acquisition by Boston Scientific (NYSE: BSX). Deb is currently on the board of directors of Sleep Number (NASDAQ: SNBR) as well as The Task Force for Global Health—an international nonprofit organization working to improve health in the world’s most vulnerable populations and strengthen care delivery infrastructure in developing countries. She is a Fellow of the American Institute of Medical and Biological Engineering and was the first woman to chair the advisory board for Georgia Tech’s College of Engineering, the largest producer of engineering degrees in the United States. In 2021, Deb was named to the Digital Health Hall of Fame by the University of California-San Francisco, and she has been named to both the San Francisco Business Times’ 100 Most Influential Women in Business and the Silicon Valley Business Journal’s 100 Women of Influence. She holds B.S., M.S. and Ph.D. degrees in engineering, with a doctorate minor in applied mathematics and statistics, from Georgia Tech.

View All MedtechWomen Board of Directors