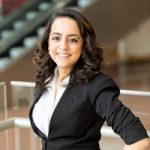 Niyati Tamaskar immigrated to the United States from India as a teenager to pursue a degree in electrical and computer engineering. From India to Indiana, Niyati and her husband currently live in Columbus with their two children. She has 17 years of work experience and currently is a Product Development Engineering Manager for a Fortune 150 company.

In 2018, Niyati was diagnosed with breast cancer while breastfeeding her daughter. While going through the grueling treatment planned for her, Niyati started to journal. The writing was cathartic and she published a memoir of her breast cancer journey called Unafraid: A Survivor’s Quest for Human Connection. Her book was featured in Forbes magazine as a book that will help spark human connections. Niyati donates all proceeds to the American Cancer Society. In 2020 Niyati took to the TED stage to talk about the cultural bias and stigma associated with cancer. She then went on to write a second book, Unabashed: Self-Advocacy and the Quest to Foster Empathy which talks about the challenges of being a young cancer survivor. In the past few years, Niyati has had several media appearances. She was featured in a video for breastcancer.org, recognized as one of 10 women engineers you should know by the Society of Women Engineers, featured in Columbus magazine front page and the Republic newspaper, and did a fireside chat with Estee Lauder Companies for breast cancer awareness which was widely appreciated. Niyati will be talking to SIO about her experience as a patient and an advocate.