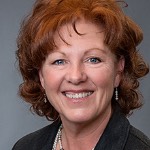 She is a former faculty member at the Arthur Rock Center for Entrepreneurship at the Harvard Business School and a former consultant to first-time CEOs in the areas of leadership, strategy, board-effectiveness, and organization building.

Ginger’s business career spans multiple industries including agriculture, cosmetics, investment banking, pharmaceuticals, medical-devices and biotech.  She is the former President and CEO of Amylin Pharmaceuticals, and the former Group Chairman, Office of the President of Guidant Corporation, a global cardiovascular medical device company.

Ginger earned a BS in Agricultural Economics with honors from the University of Arkansas and holds an MBA with distinction from Harvard University.  She serves on the Boards of Directors for Walgreen Boots Alliance and is the Chair of the Board of Directors of Clovis Oncology, Inc.  She is the co-chair of the Scientific Council for the Center for Women’s Health Research at the University of Colorado, Anschutz and on the Advisory Board of the BioFrontiers Institute at the CU campus in Boulder, Colorado.

Ginger has a broad and diverse background helping companies navigate big change under heavy regulatory conditions. During her tenure at Amylin, the company launched two first-in-class medicines for people with diabetes, was listed on the Nasdaq 100 and was rated as one of the Top Ten places in the industry for scientists to work.  Under her leadership, Guidant launched the world’s leading stent platform, was listed in the Fortune 500, was recognized by Fortune Magazine as one of the Best Companies to Work for in America, and was included in Industry Week Magazine’s 100 Best Managed Companies in the World.

Ginger has received numerous awards and honors including being named as the Emerging Company Executive of the Year by the Global Health Council in 2005, a Finalist in Marketwatch’s CEO of the Year in 2006, and named as the American Diabetes Association’s Woman of Valor award in 2006.  She was included in Pharma VOICE’s “100 of the Most Inspiring People” list in 2006 and World Pharmaceuticals magazine named her number 10 on a list of 40 most influential people in the industry in 2007.  Ginger was the first woman CEO named to the PhRMA Board and Executive Committee.  In 2018, she was recognized by Women Inc. Magazine as one of the Most Influential Corporate Directors and in 2020 was named to the EBW 100 List of Most Influential Global Leaders Empowering Women Worldwide.

In her spare time, Ginger loves living on the ranch in Colorado with her husband, Jack, a herd of horses, a spoiled rotten dog, two barn cats, and a coop full of chickens.  She rides as often as possible, spends all the time she can with her grandkids and is an accomplished pie baker.