One could argue that one of the basic value drivers in healthcare is cutting costs, but cutting prices on procedures? It would seem counterintuitive to reduce your revenue, but not if you advertise your low prices which in turn increase volume to your hospital or clinic. Unlike other purchases that consumers make, medical procedure (diagnostics, treatments, etc.) purchases are blind in that we actually don’t know the price tag until after the service has been consumed. Given the high price tag of some procedures, it can be comparable to buying a car. Would you buy a car without knowing the price?

The good news is that some healthcare providers are posting prices, and offering lower prices to attract patients. The New York Times recently published an article discussing this and the broader topic of healthcare spend. The article described how The Surgery Center of Oklahoma has been posting very competitive prices for its procedures during the last four years. Among the procedures they offer, laparoscopic hernia repair is offered at $3,975 compared to $17,200 charged at hospitals in the area. The consumer, or patient, can easily locate procedures and prices online at the center’s website: 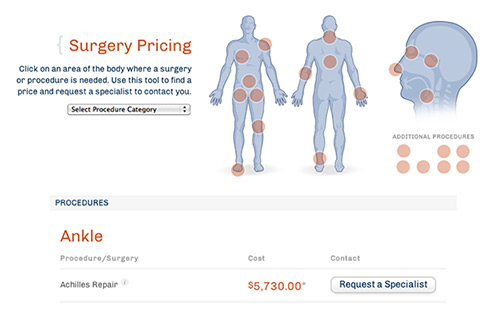 Not only has the center seen an increase in patients from the area, but patients also fly in from other states as well as Canada. The center’s price transparency has influenced other providers in Oklahoma to post their prices. Imagine this happening all over the country…true price transparency with the consumer at the helm of making the purchase decision.

Furthering price transparency and extending it to comparison shopping, there are now several websites that allow you to compare prices at different centers and hospitals. One such site is New Choice Health which was founded by a couple after they learned that they could have saved thousands of dollars on various imaging services (MRI, CAT Scan, Bone Scan) if they had just known that another center close to the one they chose charged significantly less than what they had to pay. These sites allow you to search for different types of procedures and services (mammogram, colonoscopy, PET scan, etc.) within a certain distance of your location and then you have the power of choice.

Though we have a long way to go to achieve ultimate price transparency, where providers have to compete for our business and ultimately drive value (because if you have to provide a service for less, then you will have to find other efficiencies and savings), it gives me some hope to see that we are taking steps in that direction.